The Woodruff Lab aims to develop noninvasive ways to determine when a follicle has reached full maturity in vitro. The team uses a variety of model systems to investigate such strategies, including mouse and bovine. They are developing integrated methods to monitor follicle maturity involving noninvasive measurements of follicle diameter, hormone production, secreted proteins, chromosome dynamics, and chemical signatures. Through such individualized follicle monitoring, the lab will ultimately establish a culture system that best recapitulates in vivo folliculogenesis and provide the necessary preclinical evidence to determine the best way to grow follicles in vitro for patients whose reproductive health may be compromised.

A goal of the lab is to develop non-invasive markers of egg quality that can be translated to the Assisted Reproductive Technology clinical setting.  The team has established a non-invasive assay to interrogate the transcript levels of maternal effect genes in both the first and second polar bodies of individual eggs and early embryos, respectively. Using two independent models of poor egg quality (mice of advanced reproductive age and oocytes from follicles grown in vitro under non-permissive conditions), they have demonstrated that transcript levels of maternal effect genes are significantly lower in the polar bodies from poor quality eggs compared to controls.

The human egg is one of the most rare cells in the body. For it to give rise to the next generation, it must segregate its chromosomes during meiosis and become haploid prior to fertilization.  However, meiosis in the female is highly error prone, especially as females reach the end of their reproductive lifespan.  Errors in meiosis can result in miscarriages, infertility and birth defects. Understanding the molecular mechanisms underlying this phenomenon is of great medical and societal importance, as more women are delaying childbearing and relying on assisted reproductive technologies to become pregnant. Determining the mechanisms of age-associated aneuploidy has been a challenge for the fields of cell biology and reproductive medicine.  Recent studies using mouse models of aging have demonstrated that deterioration of chromosome cohesion is a prime cause of the meiotic origins of aneuploidy.  The team has demonstrated that this alteration in chromosome cohesion also occurs in human eggs with advancing reproductive age as evidenced by increased inter-kinetochore distances between sister chromatids, as well as the occurrence of aneuploidies due to a complete loss of cohesion.

Female gametes are rare and difficult to obtain. Their metal content has remained elusive until recently, because bulk methods for elemental analysis are not feasible.  With the use of synchrotron-based X-Ray Fluorescence Microscopy (XFM), the team has been able to make paradigm-shifting discoveries about the metal composition of the female gamete. First, compared to iron and copper, zinc is the most abundant transition metal in the oocyte.  Second, subcellular zinc redistributes during meiosis and becomes highly polarized in the vegetal hemisphere. Finally, total zinc levels undergo dynamic changes during meiosis; increasing significantly between prophase of meiosis I and metaphase of meiosis II, and then decreasing before the completion of meiosis II.  Determining the cellular and molecular underpinnings and consequences of these dynamic changes in zinc has been a major research focus.  The lab has shown that zinc is required for meiosis, fertilization, and early embryo development in part due to its function as a regulator of essential cell cycle proteins. 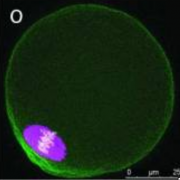 Using probes, we show that fertilization of mature, zinc-enriched eggs trigger the ejection of zinc into the extracellular milieu as zinc sparks. The sparks mediate a decrease in intracellular zinc content that is necessary for continued cell cycle progression. The mammalian egg thus uses a zinc-dependent switch mechanism to toggle between metaphase arrest and resumption of the meiotic cell cycle at the initiation of embryonic development. Read Article. 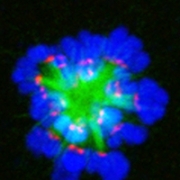 This work identifies how age-associated aneuploidy occurs in humans, which can cause infertility, miscarriages, and birth defects. We show that, in eggs from older women, inter-kinetochore distances between sister chromatids increases significantly, indicating weakened cohesion, as do the rates of unpaired sister chromatids. This indicates that loss of cohesion with increased age likely contributes to increases in aneuploidy. Read Article.